ZQ or Zamit Quotient, is the world’s first Artificial Intelligence (AI) driven and measurable future readiness indexing system that analyses and guides students towards success in the 21st century.

Based on data gathered over time and subsequent research, Zamit has identified nine dimensions for future readiness, on which it provides each student with a 9D report.  The report is developed using a proprietary Machine Learning (ML) recommendation model. Each report that a student receives is analysed by ZQ facilitators who then provide free guidance to help the student improve and, in turn, be better prepared for the future.

How does ZQ work ?

This programme is most suitable for students aged 11 years and above. Building and enhancing the ZQ is a continuous process and begins with an engaging interaction on Zamit that records the responses of the student on various aspects which are not limited to subject learning but are really beyond classroom teaching.

Why ZQ is important?

In the past we have witnessed many jobs made redundant by new technological advancements and many new opportunities spring up rapidly. The future will surely be a diverse world of unprecedented opportunities that have not even been imagined in the present, thus challenging students to work in completely unperceived professions. Experts feel, that in the next 5-10 years we will see a new quantum world that will alter the way humans work, live, and interact with each other, including working with and competing against AI powered intelligent machines and robots.

Such changes will open many doors to an exciting future but only for those who have the skills to navigate the challenges of the unpredictable world.

For students to be prepared for this new world, all stakeholders responsible for shaping the future of the learner must realise that being academically bright alone will not help them become future ready. Also, that having high IQ, EQ, SQ, AQ scores will not be sufficient to make them ready for this fast-paced, ever evolving world. Instead, they need to develop and refine their attitudes, dispositions, approach, mind-set, English language skills, life skills, build universal awareness about almost everything around them, and more. They also need to build high comfort levels with technology and its usage and be prepared to live, work, and compete in a world that will see humans, AI driven machines, and robots working alongside each other. This is a continuous and ever evolving process that must begin at school.

The question is how can we define these skills, how do we measure them, and how do we guide our students to build and improve them? The answer is ZQ.

Since the 1900s, dozens of intelligence tests were developed in Europe and America claiming to offer unbiased ways to measure a person’s cognitive abilities. About 30 years later, the idea of ‘social intelligence’ was introduced, and 20 years hence, the concept of building emotional strength was described.

And, almost 25 years later, in 2019, a research conducted by Zamit, UK, in collaboration with QAI, a UK based certification, assessment and benchmarking body, showed that for students to be successful in the VUCA world, they need more than just the IQ, SQ, EQ and AQ. The research also revealed that while ‘succeeding in the 21st Century’, and ‘being prepared for the 4th Industrial Revolution’ are good phrases to read and quote, but what they really mean for school students is unclear:  What can students do to be ready for the future? How can they figure out which career paths will emerge, and which ones will disappear? Which subjects should they study? What technology should they master? Which skills and competencies should they hone? Which dispositions and values should they develop?

The report highlighted that a VUCA future opens up a plethora of questions and finding answers to these can be stressful for the child, as also for the other stakeholders responsible for the child's development.

Zamit and QAI, UK experts also ruled that students need to develop an understanding of the future and the importance of cultivating the right attitudes and the relevant life skills, alongside academics and vocational abilities. Students also need to be able to appreciate that technology and intelligent machines are going to play a dominant role in the future, and this may result in a substantial reduction in today's large 'middle band' of jobs. The taking over of the lower and middle band of jobs by intelligent machines implies that students today need to acquire skills so that they can qualify for top-end roles that require higher order thinking skills, emotional maturity, empathetic collaboration and more. The alternate to this would be getting labelled, as the “useless class’’. This term is used by Prof. Yuval Noah Harari, to describe those who will be struggling for survival and whose jobs would be taken away by robots, automation and artificial intelligence driven smart machines.

The ZQ (Zamit Quotient), has been developed as the world’s first Artificial Intelligence (AI) driven, measurable Future Ready indexing system for school students. It is designed with the objective of analysing data of individual student’s abilities, pursuits, talents, and skills, to provide feedback and guidance to develop future preparedness for the VUCA world.

Although, a relatively new index, ZQ is set to become the global benchmark for future-readiness and will provide higher education institutions and corporations with an objective snapshot of a student’s readiness to thrive in the unknown and uncertain future. 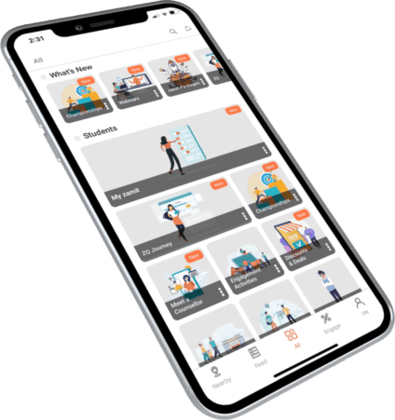